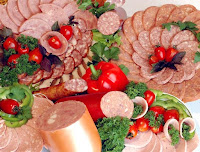 A team of scientists reviewed 800 epidemiological studies, with greatest weight to high population-based case-control studies, on the association of cancer risk due to consumption of processed meats and red meats. They just released a journal today: Carcinogenicity of consumption of red and processed meat - and as usual, the news is running wild with the story. "Meat causes cancer!". Perhaps it does...

Processed meat is meat that has been transformed through a process like salting, smoking, fermentation, curing, and other methods to improve preservation or to enhance the flavor of the meat.  Hot dogs, baloney, ham, sausage, bacon (le sigh).

Note: The article does not mention if the studies were conducted with pasture-raised/grass-fed meats or industry meats.

How does meat processing cause cancer?

Smoking or curing meat can result in the formation of carcinogenic chemicals. Cooking meat, can also produce carcinogens. And High-temperature (frying, grilling, barbecuing) produces the highest amount of carcinogens.

Did you know that fried food causes a significant amount of free radicals? And nitrosamine, which is a common chemical found in processed and cured meats, causes cancer ("90% of nitrosamine compounds were deemed to be carcinogenic" - Wikipedia).

"A  majority of the Working Group concluded that there is sufficient evidence in human beings for the carcinogenicity of the consumption of processed meat."

What about red meat?

However, red meat also contains important micro-nutrients, such as B vitamins (B12, B6) and iron. It also has high biological-value proteins. Meat also contains CoQ10, which is an antioxidant that helps protect cells from carcinogens (also in fish, nuts, and seeds).

Most people already know processed meats are unhealthy. This is not ground breaking news folks! And just to put things into perspective, about your risk from meat, there are over a million deaths per year from smoking, and red meats? Assuming all of the above is accurate, less than 34,000.

Stay away from processed foods. Not just processed meats, but party goods, ice cream, deli, etc.. You can also up your veggies and fruit intake - your antioxidants. For example, grapes, strawberries, and raspberries contain ellagic acid that can neutralize carcinogens before they mutate or damage your DNA.

Or, if you are open to a high quality nutrition program, take a look at ID Nutrition, which depending on your personal lifestyle, health, medical conditions, environmental factors, hereditary history, allergies, and diet, can contain significant amounts of antioxidants to help fight carcinogens.

Also stay away from artificial colors and flavorings, soda (including Diet Soda), white flour, corn syrup (your pastries) -  you know the drill.