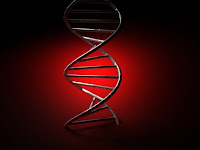 DNA (Deoxyribonucleic Acid) is basically a bunch of items stuck together that forms a fairly large and long ladder, albeit a bit curvy. It's the blueprint for every living thing. Every cell in your body has an exact duplicate copy of your DNA. It's like a long string curled up inside of a cell's nucleus.

Amino Acids are important tiny chemicals that are the buildings blocks of life.  Think of a lego blueprint, the legos can be attached together to form something, like a car. Amino acids are similar to legos in that they can attach to each other to form proteins. There are about 21 different types of Amino Acids (9 you can't make and are called essential amino acids). You can find them in a cell's cytoplasm (that gel-like stuff around the nucleus).

So how does DNA work with Amino Acids? DNA tells amino acids how to line up correctly to form protein shapes. There are literally millions of kinds of proteins but they have to be just the right shape to work. A special enzyme in the nucleus creates a partial copy of DNA, called RNA. RNA are shorter pieces of DNA and are missing one side of the ladder, single-stranded molecule (think of cutting a ladder down the middle). They are extremely small, and usually folded onto itself, and slip out through the cell's nucleus walls and make their way into the cytoplasm. Once there, they can fit into a particle called a Ribosome.

Ribosome are the heavy lifters that build proteins. Think of a conveyor belt in a factory that passes under a machine (or better yet, think of a Turing Machine). A piece of the DNA string, RNA, is on that conveyor belt. As it passes through the machine (the Ribosome particle), it reads the RNA 3-letters at a time. Those 3-letters represent an amino acid, one of the 21, that it pulls out from it's surroundings to form the next link what will be eventually the perfect protein. For example, the letters CAG form Glutamine (also CAA is another codon). You can find it in a lot of health related supplements, especially in the workout arena. Now the protein can go on to do other work, such as building a new cell!


In Summary: All of these biological properties are the building blocks of LIFE!

Keep tuned on how nutrition and your DNA affects your body.

If you want to get a jump start on your nutrition, that's personalized to your needs, check out IDLife Nutrition.