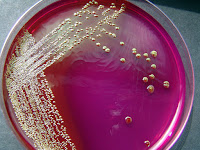 You've likely heard about superbugs - bacteria that is resistant to antibiotic drugs. The latest of these is known as MCR-1. Diseases that used to be (and currently... are) treatable could become deadly due to the MCR-1 gene. Why am I blogging about this? FoxNews.com released an article today; an urgent call to cut antibiotic use in livestock that prompted my interest in world wild calamities (... I watch the Walking Dead, so obviously I find this interesting) .

Researchers were looking for the first plasmid-mediated polymyxin resistance mechanism (aka MCR-1) through 3000 E. Coli samples.. and they found it... in both people and food.

Technically not a bug itself, but a gene that makes bacteria invulnerable to antibiotics, such as colistin (one of the last-resort antibiotics for multidrug-resistant Pseudomonas aeruginosa, Klebsiella pneumoniae, and Acinetobacter - Wikipedia), which is also used to fight bugs like E. Coli.


"When an E coli strain, SHP45, possessing colistin resistance that could be transferred to another strain, was isolated from a pig, we conducted further analysis of possible plasmid-mediated polymyxin resistance" -  The Lancet Article

How does it spread?

It's been found in mobile DNA (aka plasmids). "A plasmid is a small DNA molecule within a cell that is physically separated from a chromosomal DNA and can replicate independently." This makes it easier to spread than typical, actually it can spread fast which is why this is so alarming. You now have a fast spreading invulnerable superbug.


Interpretation of the Lancet Article: "The emergence of MCR-1 heralds the breach of the last group of antibiotics, polymyxins, by plasmid-mediated resistance. Although currently confined to China, MCR-1 is likely to emulate other global resistance mechanisms such as NDM-1. Our findings emphasise the urgent need for coordinated global action in the fight against pan-drug-resistant Gram-negative bacteria." - The Lancet Article

According to news.com.au, it's feared that this "untreatable superbug is now firmly embedded in Europe" as samples of food between 2012 and 2014 were found to contain bacteria with the MCR-1 gene in Denmark. They also mention that early last month there was a Chinese outbreak among people and pigs with a bacteria containing MCR-1.

"The scientists discovered the MCR-1 mutation in 16 E. Coli and K. Pneumoniae samples from 1,322 hospitalized patients." And from E. Coli samples taken from both animals an raw meat in china, "On average, more than 20 percent of bacteria in the animal samples and 15 percent of the raw meat samples had the gene." (source: dw.com)


"If MCR-1 becomes global, which is a case of when not if, and the gene aligns itself with other antibiotic resistance genes, which is inevitable, then we will have very likely reached the start of the post-antibiotic era."


"At that point if a patient is seriously ill, say with E. Coli, then there is virtually nothing you can do." - Professor Timothy Walsh of the University of Cardiff - study collaborator (source: dw.com)

Today, its being urged that antibiotics in farming to be reduced. In the review, Goldman Sachs chief economist Jim O'Neill, noted that more than 70% of medically imported antibiotics, in the USA, were used in livestock than in people! These antibiotics that are being pumped into our livestock are promoting the creation/development of superbugs. And now we have a superbug that is impervious to our known antibiotics.

What can you do?

For starters, E. Coli prevention, wash your utensils, use hot soapy water. Clean anything that comes into contact with raw meat; your counter tops, cutting boards, everything. Keep raw foods away from your other foods and use a different cutting board for your raw meat. Basically, avoid cross-contamination. Also, cook vegetables and meat to at least 160 degrees Fahrenheit (core temp) for at least 15 seconds. You should be already be following these basic guidelines... if not, start.

Let's hope our scientific community can find a way to mitigate or stop this, at least before scientists discover the next gene that makes bacteria invulnerable ("MCR-2").